The Price of Immortality

In the Fae world - again

Before they enter the dome, Luna casts a “pass without trace” spell on LIni and Preen, which should ensure that they are not easily followed. Luna proposes to look in the forest for a solitary pixie or other fae creature, that she can heal temporarily to ask where the Queen is. After agreeing on this plan, they enter the dome, Preen first, Lini taking up the rear. Once they are inside the dome, Preen becomes very relaxed and his mind starts to wander. He takes his tin whistle from his backpack, and moves as to play it. Lini, remembering vaguely that the previous time this was not a success, prevents him from playing, and Luna takes the whistle away from him, giving it then to Lini for safekeeping. Preen then walks away from the other two, whistling softly. Lini and Luna follow him. Luna does not understand what has gotten over Preen. Lini suggest that maybe the forest or the Fae may have something to do with this. “Ah,” Luna sighs, comprehending, “It must be some form of influential magic. I know just what to do!” And she approaches Preen, with the intention to “snap him out of it” by slapping him in the face. But before she can reach him, Preen runs away and climbs a tree. Lini has to run to keep up.
Then Preen, with a huge smile on his face, jumps and somersaults from tree to tree, disappearing further in the forest at a rapid speed. Luna tries to hit Preen with her sling, but misses. Preen ‘flees’ further into the forest, still with a huge grin on his face. Having to choose between losing Lini or losing Preen, Luna calls to Lini to wait for her when she can’t follow anymore, and goes in pursuit of Preen. It does not take long before Lini loses sight of both of them, despite her running as fast as she can. When she reaches the spot where she thought she saw Luna last, she stops running to catch her breath. 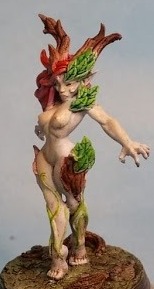 Being completely unamused by now, Luna casts an ‘entangle’ spell and Preen is caught by lianas, and hangs upside down between two trees. Luna approaches him and slaps him in the face. “OUCH!” Preen cries out, “What is your problem with me?!” while looking both at the tree that has caused him to trip up and still holds him ‘captive’ as well as at Luna.
Then Preen calls out “Watch out!” sounding significantly less fuzzy. Luna looks around her and spots a Dryad at about 45 feet distance, with glowing red eyes, preparing a spell. Preen grabs his bow and arrow, and from his upside-down position fires an arrow at the creature, but misses. Luna briefly is covered by a feeling of drowsiness and sleep, but is able to shake it off. She supports Preen and removes her entangle spell, guiding Preen partially to the ground. Then she charges at the Dryad – who promptly disappears INSIDE the tree. Luna looks back and forth between Preen and the tree into which the Dryad disappeared. Preen has lost his tranquility, it seems the influential spell has been broken. But they have also lost Lini…

After having caught her breath, Lini checks her surroundings. She has lost all sense of direction, she has no idea where she came from or where Luna and Preen went. She decides to wait for Luna, as she was told to do, but she would not mind if she would pick some flowers right? These are so beautiful flowers, most are strange and new to her, but there are a few she recognizes as summer flowers that also are found on Gozreh. Wait? What? Summer flowers? In autumn? Lini wonders about this odd fact while she keeps picking flowers, even sticking a few in her hair.

Luna traces back the route she and Preen have taken, estimating the spot where Lini should be, but there is nobody around. Fortunately, Preen hears something away from the initial path, and it does not take long to find her. When the group reunites and shares their adventures – Preen was following that little Dryad, he was not running away from the others! – Summer flowers in autumn? – Preen asks his tin whistle back, which Lini gives him, although slightly reluctantly. They continue their walk into the forest, and then Lini hears the sounds of a pan flute in the distance. This could possibly be a satyr, she tells the others, and as she only hears one set of pan flute notes, it’s probably just the one. They go in the direction Lini indicates she hears the sound from, and it takes not long before also the others hear it. When they get closer to the sound, they suddenly hear a snarl, and the flute music stops, being replaced by a sad song in a strange language. Luna recognizes the language as druidic, and comes to the conclusion that there must be a druid ahead! Preen sneaks ahead and approaches a small open area in the forest, where a satyr is sitting on a rock, singing the sad song, while three bears are lying calmly at her feet. Preen motions to Luna to indicate that there are three additional creatures apart from the satyr, and then moves around the open area in order to end up directly behind the satyr on the rock.

Then a loud growl is heard, not coming from any of the bears, but from the satyr. The song ends, and she grabs her pan flute again, playing soothing music. During this transition from singing to playing, the bears had shuddered, lifted their heads from their paws, but once the flute music started, they rested their heads again and resumed their calm poses.
Luna and Lini, at the edge of the clearing, discuss and decide that Luna should go to the druid in her bear-shape, to try to place a remove disease spell on her. A shimmering takes place and where Luna was, now a large bear is present. The bear moves slowly toward the open space with the satyr and the three other bears.

The Satyr and the Three Bears

I'm sorry, but we no longer support this web browser. Please upgrade your browser or install Chrome or Firefox to enjoy the full functionality of this site.